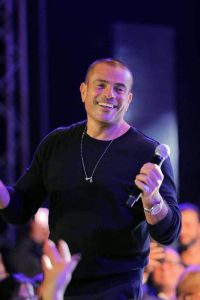 Amr Diab appears in a video: "I've already made a song with Irina the Corona Days, which is Ahi Ahi."

He continued: "Then I was in Egypt, and it's in Greece, and the song was supposed to be shot, but in that period I was infected with corona."

Several reports had speculated that Amr Diab could be infected with the corona virus, from Dinah Al-Sherbini, whose co-star, "The Game of Oblivion," had been infected by a fellow participant, and in which the star, Please Be Serious, had died of the infection.

But Dinah Al-Sherbini has never reported an injury to Amr Diab before, and merely said that he applied isolation to himself, fearing to his family and friends that any injury might be inflicted on them.

We have 277 guests and no members online