During his meeting with the Prime Minister and the Minister of Industry and Trade, President El-Sisi, he directs "Technology Settlement" 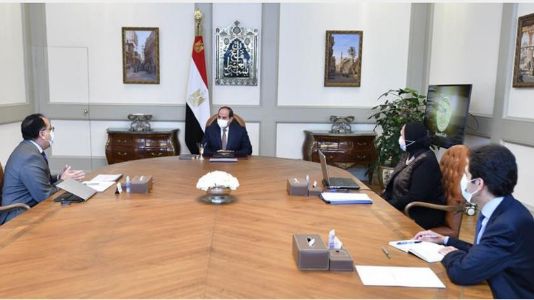 Egyptian President Abdel Fattah Al - Sisi has called for the strengthening of efforts to deepen domestic industrialization and technology settlement to meet the needs of the domestic market, given the growing production requirements of national enterprises in all areas.

The Directive also aims to bridge the gap between exports and imports, achieve self-sufficiency of domestic products, and thereby reduce the foreign currency import bill from abroad, especially with regard to industrial inputs.

Sisi conducted a thorough review and thorough inventory of the plots previously allocated to industrial activities that had not been exploited as hoped in the implementation of the activities originally targeted, and examined how best to develop their utilization in the light of the actual investment and development needs of each province, as well as to continue efforts to establish industrial parks at the level of the Republic in view of the locomotive of national industry for economic development.

According to the Spokesperson for the Presidency of the Republic, the meeting reviewed import substitution efforts and increased reliance on local product, as well as developments in the establishment of industrial parks at the level of the Republic.

and support for medium and small enterprises according to the economic fundamentals and investment opportunities of each village.

We have 62 guests and no members online