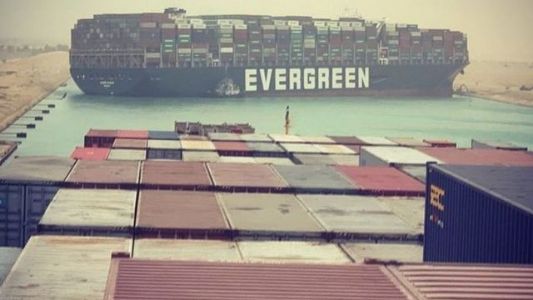 Shipping sources said that the Suez Canal traffic stop is exacerbating the problems of shipping lines, which are already facing disruption and delays in supplying goods to consumers.

In its most recent challenge to the sector, sources told Reuters that more than 30 container ships are unable to navigate after the 400-metre-long Ever Geffen in the Suez Canal to stop crossing traffic.

Container shipping companies, which transport various retailer goods from mobile phones and clothing to bananas, have already been suffering for months due to the Corona virus pandemic and increased demand, increasing the bottlenecks of the logistics sector worldwide.

"At a time when supply chains are under pressure, a large container ship is shutting down one of the main routes of world trade, as the Suez Canal Authority moves to liberate the channel, the accumulation increases, and the production inputs that are pending will affect supply chains," said Johanna Koenings, chief economist at ING Bank.

It should be noted that some $9.6 billion of daily maritime traffic was stopped by the large container ship that settled in the Suez Canal.

It is reported that some 300 vessels in the world are either stuck in the Suez Canal waiting to cross the waterway or identified it as a next destination, indicating that some 50 vessels use the waterway every day.

In a statement, she added: "As a regular user of the channel, MSC follows the situation closely to see developments in case any contingency plans are needed for the fleet or service network and to see to what extent the container cycle is affected in a market facing Saami

And it's stamped with: "MSC customers waiting for shipments across the Channel in the coming days should prepare for possible changes in etc.

Commercial sources and the shipping sector said that the impact on the transport of goods from manufacturers in Asia to buyers in Europe could increase, depending on the continuing delays in the Suez Canal.

According to Léon Willems, spokesman for the port of Rotterdam, Europe's largest outlet, the demand for logistics services was already outstripped by the Suez Canal incident.

"All western European ports will be affected. It's now been 48 hours and we hope for all companies and consumers that it will soon end. When these ships arrive in Europe, there will inevitably be waiting times, we have large areas, but the number of shipyards and cranes to unload these cargo is limited. "

Shipping sources said that further global delays would cause further pressure on United States ports, which are already experiencing delays in handling more than 90 ships.

In recent weeks, data from Standard & Poor's Global Platts Connect reported that the cost of shipping goods from Asia to the East Coast of America increased to more than $5,000 per equivalent unit length of 40 feet, compared to $2775 in March of last year.

Analysts say the U.S. East Coast ports are more exposed to any disturbances in the Suez Canal than West Coast ports.

C-Intelligence Analytics Chief Executive Alan Murphy said that the continued closure would also exacerbate the current global deficit in container services, as it was not possible to return the containers stuck with ships to Asia for use in new shipments.

This may therefore lead to a further increase in freight rates, which is already at an unprecedented level, as exporters race for the few remaining empty containers.

In a statement posted on its official website, the Suez Canal Authority said it had researched the "Tikrik" option about the large container ship during a meeting with a rescue team from the Dutch company Schmidt Salvidge.

The statement stated that the meeting had seen the introduction of the "proposed scenarios, including the possibility of the circumnavigation of the vessel through FDA kicks."

The Panel added that

This came after the Authority announced, on Thursday, the temporary suspension of traffic, as eight boats continued their efforts to float a giant container ship, which had been swept up in the southern part of the Canal, two days earlier.

A source from Gus Navigation Services of the Suez Canal revealed that the decommissioning of the ship was extremely difficult, stating that it seemed impossible.

The source said that the width of the ship absorbed the entire width of the channel, and it was difficult to enter the equipment and onash with its shoes to lift the containers loaded with it.

Ong Yi Kong, Minister of Transport of Singapore, which is the world's largest trans-shipment centre, warned that disruption to the Suez Canal could temporarily impede supplies to the region. Russian Foreign Affairs warned that it could take several weeks to liberate traffic through the Suez Canal.

We have 95 guests and no members online