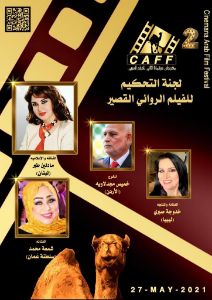 In its second edition, the Cinemana Arab Film Festival arbitration committees continue their work to select the winning films in each category of the festival, namely, short feature films, recording films and motion films, through criteria established by each jury.

In this regard, the Chairperson of the short feature film arbitration panel, Madeleine Taber, confirmed that she and the members of her committee, composed of Libyan artist Khaduja Sabri, Omani artist Candle Mohammed and Jordanian director Khamis Majdalawi, had identified the winning film in this category among the 52 films whose participation had been approved by the technical committee.

Topper noted that the selection of the film was very difficult for the quality of the participating films and the ideas presented by the young directors who proved that they had a cinematic idea that we, as Arabs, are proud to be able to implement in such a sophisticated way, noting that she would announce the film's name as the winner of the Best Feature Short Film Award, named after the late Big Star Mahmoud Yassin Award, at the end of the festival next 27 May.

For his part, the Chairman of the Film Arbitration Commission, Dr. Abdallah Abu Awad (Morocco), said that the recorded films received were different subjects, and that this helped him and the members of his Commission, namely, the director Supérieur Garrada (my place).

Filmmaker Faytis Qannah (Saudi Arabia) set a set of criteria for her approach to film arbitration: "The idea of the film and the importance of its subject matter, as well as the artistic and dramatic construction of the film's script and what message he wants to convey to the recipient."

26 films, ranging in duration from 30 minutes to 6 minutes, and addressed various topics, wishing all participants well with the award for this category, named after Kuwaiti film producer Youssef Al-Mairey.

In a related context, an arbitration panel has completed its review of films submitted to the competition by several Arab States, which is competing for the Taft University Award for Best Arab Motion Picture, the largest material award in the Arab world.

A Motion Film Arbitration Panel was formed by Motion Film Director D. Mohamed Ghazala (Egypt). Mustafa Al-Shuki (Iraq), filmmaker Abdullah Al-Batashi (Amman) and animator Youssef Al-Baskhi (Kuwait). The Commission received some 15 animated films competing for the Competition Award and the Arbitration Commission Award, with the awards to be announced at the conclusion of the Sinimana Festival, which will take place on 27 May 2021.

The Chairman of the Committee paid tribute to dr. Ghazala is the beginning of the Cinemana Animated Film Competition, the first to be launched by an Arab festival to celebrate this art, which is not new to the Arab world.

The Iraqi director, Dr. Al-Sha'b, pointed out that the situation in Iraq was a serious one. Mustafi Al - Shuki is an efficient Senimana Animation Competition Committee, which has been characterized by the transparency, professionalism and professionalism with which colleagues have worked, through the designation of the plan, the evaluation mechanism and the foundations by the Chairman of the Committee and the agreement by the members to achieve results.

While Kuwaiti artist Youssef Al - Bakhti pointed out that the participation in the animation competition was diverse in terms of classification as well as the use of different visual media, the efforts of the participants were evident in trying to employ animation techniques and cinematography tools to communicate significant meaning and content.

The member of the Arbitration Commission, Omani director Abdullah Al-Batashi, said that the work of animation as an area of astonishment and imagination allowed for a unique visual visualization of the Arab arts.

He also encouraged potatoes to find tools that would support the investment of art in the reality of Arab societies more than it does.

We have 99 guests and no members online