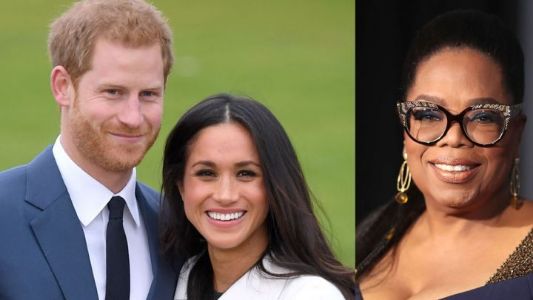 The American publicist, Oprah Winfrey, made a dramatic confession about the backstage of her upcoming talk, which she had with British Prince Harry and his wife Meghan and is the first of them after they relinquished their royal status.

The presenter, Gayle King, Oprah's best friend, revealed that the latter told her that her television meeting with Harry and Meghan, which will air on 7 March, is her best interview in her long media career.

King, 66, followed her viewers: "We want to remind you that Harry and Meghan are talking to Oprah, it's the first big radio interview between them since they abandoned their grand royal duties, and I've heard from reliable sources citing Oprah personally that it's the best interview I've ever had."

Gayle King expressed curiosity about what the expected interview would involve, and continued: "I think she's carrying something."

And Oprah Winfrey's interview will begin with Meghan Markle, who will talk about "everything from getting into life as a royal business, marriage and motherhood, and philanthropy, to how she treats life under intense public pressure."

After that, her husband Prince Harry will join the interview to answer with Meghan questions about their move to the United States and their hopes for the future.

It is reported that the television interview will be broadcast just a few weeks before the first anniversary of Prince Harry and Meghan's termination of their roles as members of the royal family on March 31.

US network CBS described the interview as "intimate conversation."

It is reported that Oprah Winfrey is a personal friend of Meghan Markle, and attended her royal wedding in May 2018, at which time there was speculation that she and Prince Harry were being interviewed.

We have 476 guests and no members online