Mikhail Lomonosov; The Father of The Russian Poetry 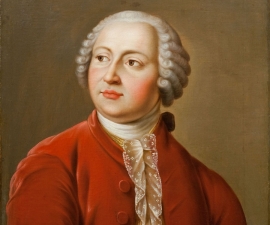 Mikhail Vasilyevich Lomonosov, he is the first poet who is represented the Russian poetry,almost is considered as the father of poetry in Russia at (1711-1765).

was a Russian polymath, scientist and writer, who made important contributions to literature, education, and science. Among his discoveries were the atmosphere of Venus and the Law of Mass Conservation in chemical reactions. His spheres of science were natural science, chemistry, physics, mineralogy, history, art, philology, optical devices and others. Lomonosov was also a poet and influenced the formation of the modern Russian literary language.

Lomonosov was born in the village of Denisovka (later renamed Lomonosovo in his honor) in Archangelgorod Governorate, on an island not far from Kholmogory, in the far north of Russia. His father, Vasily Dorofeyevich Lomonosov, was a prosperous peasant fisherman turned ship owner, who amassed a small fortune transporting goods from Arkhangelsk to Pustozyorsk, Solovki, Kola, and Lapland. Lomonosov's mother was Vasily's first wife, a deacon's daughter, Elena Ivanovna Sivkova.

He remained at Denisovka until he was ten, when his father decided that he was old enough to participate in his business ventures, and Lomonosov began accompanying Vasily on trading missions.

Learning was young Lomonosov's passion, however, not business. The boy's thirst for knowledge was insatiable. Lomonosov had been taught to read as a boy by his neighbor Ivan Shubny, and he spent every spare moment with his books. He continued his studies with the village deacon, S.N. Sabelnikov, but for many years the only books he had access to were religious texts. When he was fourteen, Lomonosov was given copies of Meletius Smotrytsky's Modern Church Slavonic (a grammar book) and Leonty Magnitsky's Arithmetic. On his religious views, Lomonosov was a deist.

In 1724, his father married for the third and final time. Lomonosov and his stepmother Irina had an acrimonious relationship. Unhappy at home and intent on obtaining a higher education, which Lomonosov could not receive in Denisovka, he was determined to leave the village.

In 1730, at nineteen, Lomonosov went to Moscow on foot, because he was determined to study. Not long after arriving, Lomonosov obtained admission into the Slavic Greek Latin Academy by falsely claiming to be a priest's son. That initial falsehood would nearly get him expelled from the academy a few years later when discovered.

Lomonosov lived on three kopecks a day, eating only black bread and kvass, but he made rapid progress scholastically. After three years in Moscow he was sent to Kiev to study for one year at the Kyiv-Mohyla Academy. He quickly became dissatisfied with the education he was receiving there, and returned to Moscow several months ahead of schedule, resuming his studies there.He completed a twelve-year study course in only five years, graduating at the top of his class. In 1736, Lomonosov was awarded a scholarship to St. Petersburg Academy. He plunged into his studies and was rewarded with a two-year grant to study abroad at the University of Marburg, in Germany.

Lomonosov returned to Russia in 1741. A year later he was named adjutant to the Russian Academy of Science in the physics department.In May 1743, Lomonosov was accused, arrested, and held under house arrest for eight months, after he supposedly insulted various people associated with the Academy. He was released and pardoned in January 1744 after apologising to all involved.

Lomonosov was made a full member of the Academy, and named professor of chemistry, in 1745. He established the Academy's first chemistry laboratory. Eager to improve Russia’s educational system, in 1755, Lomonosov joined his patron Count Ivan Shuvalov in founding Moscow University.

In 1761, he was elected a foreign member of the Royal Swedish Academy of Sciences. In 1764, Lomonosov was appointed to the position of secretary of state. He died one year later in Saint Petersburg. Most of his accomplishments were unknown outside Russia until long after his death.

In 1755 Lomonosov wrote a grammar that reformed the Russian literary language by combining Old Church Slavonic with the vernacular tongue. To further his literary theories, he wrote more than 20 solemn ceremonial odes, notably the Evening Meditation on the God's Grandeur. He applied an idiosyncratic theory to his later poems – tender subjects needed words containing the front vowel sounds E, I, Y and U, whereas things that may cause fear (like "anger", "envy", "pain" and "sorrow") needed words with back vowel sounds O, U and Y. That was a version of what is now called sound symbolism.

In 1760 Lomonosov published a History of Russia (the first ever?). In addition, he attempted to write a grand epic about Peter the Great, to be based on the Aeneid by Vergil, but he died before he could finish it.

Now let's add one of his famous poems:

The day conceals its brilliant face,

And dark night covers up the fields,

Black shadows creep upon the hills,

Light's rays recede from us.

Before us gapes a well of stars -

A grain of sand in ocean swells,

A tiny glint in endless ice,

A feather in a raging fire,

So I am lost in this abyss,

The mouths of wise men call to us:

"A multitude of worlds dwell there,

Among them burning suns untold,

And peoples, and the wheel of time:

There, all of nature's strength

But where, O nature, is your law?

Dawn breaks from out of northern lands!

Is this the home of our sun's throne?

Or are the icy oceans burning?

O thou, whose lively gaze can see

Into the book of law eternal,

For whom the smallest part of things

Reveals the code in all of nature,

Now tell us what disturbs our souls?

Why do these bright rays sparkle in the night?

Why does fine flame assault the land?

Without a thundercloud can lightning

Rise from the earth up toward the heavens?

How can it be that frozen steam

Or rays of sunlight sparkle bright,

Bend toward us through the thickened air;

Or do the peaks of stout hills glow,

Or have the sea winds ceased their song,

And smooth waves struck the space.

Regarding what lies right before us

O, tell us, how enormous is the world?

What lies beyond the smallest stars?

Are thou aware of all creation's end?

Tell us, how great is our Creator?

We have 118 guests and no members online