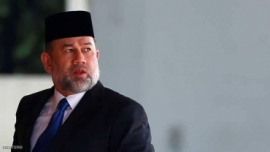 The world woke up to the news of the abdication of Sultan Mohammed V of the throne, according to the information received that his rule should have be continued! So what

is the reason to push Sultan Mohammed to give up and what about the future of Malaysia!

Although there has been a general debate over the behavior of Sultan Mohammed V as head of state since the election of Paktan Harapan (People's Party) in the historic elections of May 9, 2018, the idea of ​​the prematurely-terminated Kelantan rule was unthinkable, Before he gave up the ruling, what happened?

Behind the scenes, it appears that some of the other Malay rulers were upset by the damage to the royal institution at the time.

Prime Minister Mahathir Mohamad complained in June that Sultan Mohammed had not complied with the rule of law to delay his inauguration and appoint a new deputy general.

The historic change of government on May 9, which ended Parisian Nacional's six-decade rule since independence, generated much public debate about the role of kings in democracy in Malaysia.

At the same time, the media adviser to the prime minister, Kadir Jassin, claimed that 255 million renminbi (S $ 84.8 million) had been spent by Agung during his 16-month term.

But the straw that gnawed at the camel's back, was his secret wedding on November 22 on Russian beauty queen Oksana Vojvodina.

In November and December, Sultan Mehmet was ostracized for recuperation after medical treatment. Instead, there were reports of his wedding party through world news pages and thrillers.

Miss Moscow, 25, is said to have converted to Islam - the official religion of Malaysia and all her kings - earlier this year, but stories about her  portraying, her career as a fashion model and watching it on reality television have tarnished the image of Sultan Mohammed V among conservative Muslims. "The unruly acts, according to the description of nearby circles, called for disagreements with the government, which is uncommon in Malaysia, but the regularity of these disputes with the royal family has become particularly disturbing, given the history of the royal family" with Toon Mahathir.

During his first term in power from 1981 to 2003, Dr. Mahathir was repeatedly able to obtain public support in order to cut off the royal family's wings. In the early 1990s, his government passed laws that removed some royal immunity and the need for its approval to publish new laws.

According to official sources, four of the country's nine kings began discussing how to resolve the issue early last month, including Perak's governors, now Agung's deputy, and Perlis, a senior royalist.

Days after the end of Sultan Shah's stay at the National Palace as Acting Agung on December 31, the Governors' Conference was held three times a year, but it was a futile meeting.

Shortly after the meeting last Wednesday, rumors surfaced that Sultan Mohammed had asked him to step down within a week or face an embarrassing decision to deport him. But it was not clear if those who were pushing for his resignation had obtained the required majority of at least five.

Although the referees met again unofficially without Agung during the week, Dr. Mahathir said on Friday that he had no indication of the Sultan's status, and that he had heard only the same rumors as others.

However, the announcement by Sultan Mohammed on Sunday that he will give up the verdict indicates that he will return to Kelantan for the possible knowledge that the writing was on the wall and that enough of his peers to vote for them is not enough.

While his tenure requires a four-week wait to elect a new Agung, the royal family may wish to resolve the matter much sooner than to overthrow Sultan Mohammed V's hopes of return and avoid prolonged public concern over their royal affairs.

We have 390 guests and no members online