The Masters,The Owners and the stage of The next war 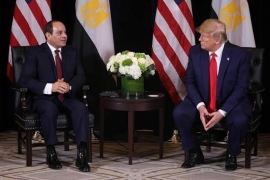 The devils ever never say ;

Every day will create new conflict so they can sell their weapons and be Masters of World... This terrorist country Turkey who destroyed Syria and supported its brutal

terrorist Daesh now moved them under the eyes of USA to Libya...Another destruction in new Area...

Game of the Masters ,The maker of wars ,the owner of weapons will continue their mission in the Middle East !

Who can say stop to the devils?

Turkey has got the green light , why not and it has the rockets shield on its lands,Remember!

Donald Trump ,The American President can’t stop the devilish plot , one day before he was one of the game too and competed with the democrats who can approve the same plan in the Middle East but the hidden method was different...Both are planning for the next war but how to do it and when ...who can be used as a victim,how to prepare the global opinions to accept it... all these factors are different . From here the Republican fight with the democrats.

Trump now will approve the mission of the war because he is defeated inside USA and no hopes for him to continue,his weakness case let’s him apply the criminal game in Libya for the Turkey side!

Let’s talk more about The Master of  Arabic spring revolutions “ Gorge Soros” who nowadays raises the fire of revolution inside USA by the same method and he could to threaten Trump ...The President who stands particularly with Egypt’s side and has a strong plan for it...but the devilish plan refused and don’t accept to go in this way....

I am sorry my Americans friends from Blacks to tell you that you are used too!

Actually no one care about your case but they rise up your anger to be a golden paper can be used and play with it against Trump who is known with his hatred to Blacks since the last election “ please go back to videos for him and listen to his speech before winning the election “.

So you aren’t the target,but your president who must agree on the next war and they bloody river in the M.E.

The devils even can’t wait until the known times 2023 ,though they have to do ... but the Turkish devil can’t wait or accept the failure in front of Elsisi “ the president Egyptian hero “ who stopped in front his terrorism and stopped it in the world and helped Europe to confront him and saved Egypt...

Turkey is the devil’s deploy in the world... Since  the Europe refused its membership in EU after all his attempts, Ordoghan the Turkish President decided to be khalifa and invade the world with terrorism ... he called all gangs members of the global and put them in Syria and Iraq ... he paid them money of the Oil.

Now his plan is to invade Egypt,Greece and revenge of them ...

The story of the game actually has many chapters!

I think you have to read and search more at least to understand what’s going on in the game which you will watch soon. The stage is ready for the biggest deadly war.

We have 78 guests and no members online