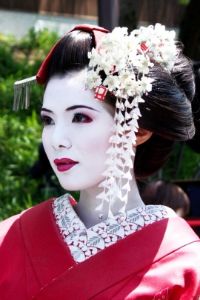 Because I love Japan , I decided to write about its history.

One of the things I cannot pass quickly is; “geisha”girl

But I hope to write my opinion before I write about her historical story,and this because I feel how much she suffers from the unfair treatment...

Geisha through the history is the respectful young lady who is able to give you everything with elegance and respect.Neither she is a prostitution nor a wife ,but she is the one who can host you gratefully and introduces a show of dancing,singing and does everything to amuse you.

In our country Egypt she looks like our beautiful dancer ,she can dances,sings,entertains you and other times can be half wife only ,wife for bed.

The men can live with her partly,love her but can’t marry her?

In the old times people struggle to understand Geisha,loved her the most but could not forget that she is a lady for amusement only. The society looked with respect to her role that Geisha plays though that they condemned her and made from her a toy With no feeling and may they had done the worst they kidnapped her future !?

By the way nothing is changed though the time did ,just this job took more freedom but with its old view.

In another aspect to the subject,and away of talking about Geisha,let concern more with the life the woman now....Actually she is the same copy of Geisha,She is the one too who must do everything in life more than the amusement that geisha gave.

Current Woman works day by night to save money, raise up her kids, educate them and do the rest of works as a wife.

The woman accepts to be half man and half female ,running all the time to cover her responsibilities,maybe at the end her man can satisfy on her one day.

Woman still live the life such as a guilty person,but she doesn't know what is exactly her sins....More than that ,she could not save for herself at least some of love with respect from her husband or the community she lives with !

She failed to be lucky as the Geisha lady !the modern woman isn't lucky too because her destiny doesn't support,though all the huge discoveries and the high technology but in the third world and their societies still have the same low look to the woman ,they think she is " a kind of creatures ,who is created to make everything for the man, give him the support , the amusement and the money ".

If you don't believe me, please check the cases of working woman in Africa,Asia,south America ,you will find millions of sad stories with true crisis !The United Nations with all its efforts,failed to help them or end the catastrophes circumstances which these poor working women live in.

In the Middle East, there millions of women who work instead of their men,and all their money go to their husbands and kids...maybe she can't find the price of the morning breakfast.

The husbands of these women are living mostly under the influence of drugs and they are not responsible persons who work or grow up the children too .

Number of women who faced violence by her husband and kids reached to one million and half during the last five years in a country like Egypt, it is also not a correct number because most of the the cases ,women fear to inform the police or complaining.

Crisises go to the worst with the rise up of prices in everything and the workers find themselves in a need to another job besides the other...what lets the woman sleeps about four hours only daily .It effected on her health and huge number of them are sick.

laws,decisions, words of sympathy,or even raising their salaries cannot help them...So number of suiciding among them reached to the top.

Returning to Geisha who is our inspiration in this article , She was a lady can take a rest and live in high level besides the richest persons ...while the modern woman today makes the same things but lives in the underground and in a very poor circumstances.

Even her luck of marriage is bad ,no one likes to marry a working girl, she is poor and can't be suitable.

Though all these harshness believe or not,these women are the most successful,significant and supporting to their states!

And here there's another huge difference between JAPAN and the third world countries.

In Japan ,as a respected and advanced country, the society keeps on Geisha as a historical tradition they must save her and it is not accepted to be forgetten.So they courage the modern lady to Geisha but with all the rights that must have.

While in the third world, their countries do all their best just to keep the poor working women silent and never ask with a right!

Although that both nations share in refusing to reply on this important question;

Why do men give themselves the right to have 2 women in his life at the same time? One for his amusement and the other for the respected image !

This converted duplication photo can kill any sense of beauty to the art of virtue, as well as the art of giving and taking.

At the end our societies need more clearness with their vision of things and they must determine whether they want to advance with their humanity or not!

Whether they want to find true happiness or not.

Societies must stand beside the poor labor ,and never consider them as slaves with no rights!

Societies must understand that Fake attitude comes from lair visions that they believe in and that's the reason behind all our painful stories!

We have 152 guests and no members online