The African Paradise gateway to Egypt is not only a historical depth, but also a strategic security 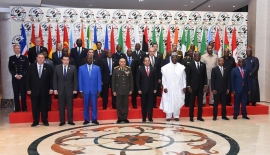 T here is no doubt that the African continent is the heart of the earth as well as the kingdom of treasures'  for all the world and this is because; it is rich with the fertile lands, the minerals and the enormous manpower.

Unfortunately, The African continent had lived many adversities through the ages, it was exploited brutally… As the African peoples, had been enslaved, stolen their life, their properties, and worse than that their lands with all its treasures.

These treasures are being stealing till this time, rather than something changed on ground. But though that all the demonstration of freedom that countries try to show, it disappear with any crisis these African countries can be confronted ! So the true fact here that the colonialism had left the African countries in front of the international laws already, but it is still going on and will play hidden roles in reality and, unfortunately, it is confirmed by numbers and documents from the flagrant interference of Western powers in the policies and economics, and even the lives of African …What calls from global conscience to address the new colonialism and authoritarian political influence on these countries.

As a result, the new colonialism, which left with his body but leave their mind swims in the creation of the bad guys are playing against their homelands or encroaching on the property of their siblings and cause wars and disputes and seas of blood, besides a map of borders among the countries could to evoke the conflict which is still the cause of all African troubles.

President Jamal Abdel Nasser and his vision for Africa

Before tens of years, Egyptian President Jamal Abdel Nasser had put his hand in the hands of African brothers and they walked and fought together in their trip of freedom and  to get out  the occupiers …They succeeded to get their  freedom facially !

From here president Abdel Nasser was worry from the return of occupier again, so he was very wise  and called for the nation-building to stop any greed   to occupy these states again, as he used to say;

" The time came for the victory of our brothers in Africa, those who are the peoples of  dignity and originality and they have the great right to live the life that they choose with respect".

President Nasser never thought that his contribution to the restoration of freedom to African countries, is a kind of a help, but a duty on Egypt.

He had believed that the true strength of Egypt, is in the strength of the African countries …But it depends on their freedom and building their powerful nation ,that can compete  for the real progress and to get out of the neck of the developing world.

Nasser believed that science, culture and faith to respect the diversity of different minorities and the people of Africa, are a fundamental reason for the wealth that they have to maintain over the long term.

But he feared that colonialism remains on the ground, despite its departure and playing again in the destiny of the peoples.

So President Nasser used to say;

"It's time for the Human being to apologize to the Africans, and from other side the Africans must share the world  their dignity and pride."

But Egypt has disappeared suddenly for many years, and new players have been allowed to break into the continent and play freely ... The players did not harm Egypt alone, but   also they damaged the African countries who agonist the colonialism long life..

These players went to Africa to invest in Africa's treasures and somehow they convinced the people, that they will help them in the path of development, and will invest in them!

From here the importance and vitality of the return of the Egyptian role to enlighten the hidden side of the matters ... There's a difference between investment in people or investment for the benefit of the people.

And for as long as Egypt's vision has provided throughout history, real cooperation based on respect for others and build a base of mutual work, which has aimed to provide and protect peoples.

The way to Africa after the revolution of June 30

After the revolution of the June 30, 2013 Egypt has been affected , due to the suspension of its African Union membership , which forced Egypt to think again in the whole image ,maybe it understand the new situation.!

Egypt gazed at its mirror and asked itself this important question;

" How the African Union, which was established by Egypt in 1963 and mostly it is funded from Egypt too , could to suspend its membership , till they aren't sure of the reality of the situation in Egypt, and what actually had happened to the people who revolt against the terrorist group?

The strange situation of  African Union against Egypt in critical time, opened a window to the Egyptians to see the hidden factor which controls the African decision …This is the same invisible factor who is hampering the development in their countries and even  worked to indulge  them in problems , internal conflicts , wars and divisions.

The observer on the African affairs in the last forty years, appeared to him that this hidden factor who played in the continent aims to hamper the development countries

We have 179 guests and no members online

The European Union announced a ...

Guterres warns of the ...

The Secretary-General of the ...

Vitamin D is an important ...