Between Tehran and Ankara at the ambassadorial level 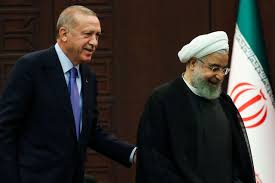 Turkey responded to Iranian calls to leave Iraq and respect its territory, with a fiery statement by the Ambassador of Ankara to Baghdad.

According to Turkey's official Anatolian Agency, today Saturday, Turkish Ambassador to Iraq Fateh Yilds said that "Iran's Ambassador to Baghdad Erg Masjid is the last person who could teach Ankara a lesson in respecting Iraq's borders."

In an interview with an Iraqi-Kurdish site, Masjid had called on Turkey to "leave Iraq and respect its territory."

Yildes responded to the Iranian ambassador's statement in a tweet on his Twitter account: "I believe that the Iranian Ambassador is the last person who can give Turkey a lesson in respecting Iraq's borders," according to the same source.

Earlier Saturday, the website Rudaw published statements by the Iranian Ambassador to Baghdad saying: "We reject military intervention in Iraq, and the Turkish forces should not pose a threat or violate Iraqi territory," asking "What is Turkey doing in Sinjar District?"

Yesterday Friday, Iraqi journalists reported that Turkish aircraft had carried out raids on three villages near Jebel Karah in the Dahok Governorate of the northern Iraqi Kurdistan region. Media reports indicated Turkey's intention to carry out a new military operation against PKK in the Sinjar mountains in northern Iraq.

We have 542 guests and no members online