Libyan Minister for Foreign Affairs: "Relations between the Egyptian and Libyan peoples are deep and strong" and greater than common interests 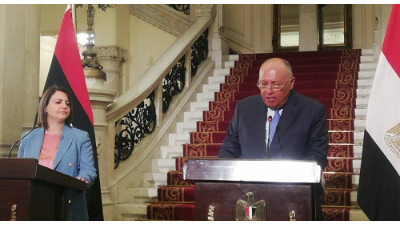 The Minister for Foreign Affairs and International Cooperation of Libya, Najla Al - Mankash, said today her country's relationship with Egypt is "historic," stressing that this relationship is greater than the common interests.

"The relations between the Egyptian and Libyan peoples are deep and strong," said Libyan Foreign Minister Njala Al-Munqashq.

During her press conference with her Egyptian counterpart, today in Cairo, Almanachi added that "Egyptian and Libyan views are more identical than different."

The inscriptions indicated that international signs indicated support for stability and progress.

She stressed that she had discussed with the Egyptian Minister for Foreign Affairs the implementation of the road map and all the agreed phases, as well as the importance of international support for that.

The Libyan Minister for Foreign Affairs stressed that the Libya Stabilization Initiative was aimed at defining the mechanism for implementing the three tracks agreed earlier.

My thanks go to the Berlin II Conference for its efforts to complete the road map. We also support the initiative to stabilize Libya, which will be launched in Berlin II.