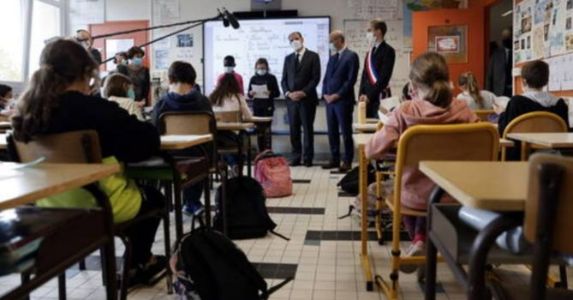 The arrest of 4 students of the age of 10 in elementary schools in France on charges of "glorifying terrorism" sparked widespread controversy in some local public opinion, as well as the resentment of the Muslim community about these arrests.

Those students, who were preceded by rebuking and punishing others during the past few days, are being accused of uttering phrases described as "violent and disturbing" during the minute of silence in the spirit of the slain teacher, Samuel Patty, with which all French schools were bound last Monday.

The 4 students, 3 boys and a girl, were arrested by the police at their homes in Albertville, Savoy County, after the school principal informed them. The local public prosecutor stated that they said, "The terrorist was right in what he did."

For its part, the Ministry of National Education added on Twitter that they "justified the killing" on the pretext that "it is forbidden to harm the Messenger, adding that they kill their professor if the Messenger is drawn in a caricature."

The public prosecutor defended the police justifying their behavior, saying, "Given the age of the students, the investigation should have been made about the family milieu and it was not possible to just summon them. Rather, the house had to be searched and we did not know whom we would deal with," to conclude that "the police performed their duty within the framework of respecting the law" .

For his part, the Minister of Interior added, "It is incorrect to say that the police used excessive force."

On the other hand, the parents of the arrested students expressed their deep resentment and condemnation of the detention method, which they considered exaggerated. The mother of one of the students described the police intervention in the French newspaper Le Duffinne Liberi by saying, “At about 7:15 am, our 13-year-old daughter opened the door to the police. Some of them were armed with their faces covered with masks. Our son was still sleeping, so they entered his room.” ..) They dealt with us as if we were terrorists, ”and took the student and“ information equipment ”with them, according to the newspaper,“ 20 Minutes, ”meaning probably computers, smartphones, or both.

And if the preliminary investigations showed, according to the public prosecutor, that “the families were not radicalized,” yet the children concerned with the accusations are expected, according to the same source, to be obligated to follow a special education program.

We have 442 guests and no members online