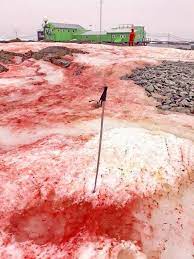 In a phenomenon that spread months ago and has puzzled and worried scientists, local residents and researchers interested in the environment have observed, the color of the ice over some areas of the Alps has turned red.

Some locals in the Swiss Alps call this "melon ice" or "bloody ice."

The scientific cause of the phenomenon is the high prevalence of some type of algae above the ice, while more information is still being sought.

Extensive monitoring of snow algae is noted, on large areas of alpine slopes.

According to research published by the scientific journal Fronterz Ann Plant Saince, the unusual spread of algae is caused by the retreat of glaciers in the region.

However, the spread of "bloody ice" raises concerns that snow may absorb more heat, accelerating its melting pace and increasing adverse effects on the environment.

While global warming has watched the emergence of algae in high-rise environments, the long-term consequences of this phenomenon "will not be friendly to living organisms," according to the journal's scientists warning.

Microbiologist Heather Mogan told "The New York Times," that growing alpine algae serve as "beacons for ecosystem change," adding that scientists are working to determine how temperature patterns relate to their prosperity.

She explained that "there's very little we know. We need to go deeper. "

In 2020, researchers gave a study in the journal Netcher, the first estimate of the mass and distribution of snow algae colonies along the Antarctic Peninsula.

Warming in the Antarctic Peninsula has already exceeded 1.5 degrees Celsius from pre-industrial temperatures, and the authors of the study predicted "a net increase in the size of snow algae and biomass as the peninsula heats up."

We have 274 guests and no members online