The worst in 11 years... A 7.2-magnitude earthquake strikes Haiti 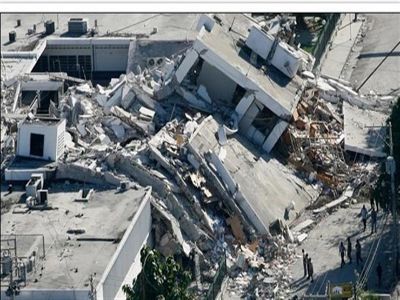 Northeast of Saint-Louis-du-Sud, a 7.2-magnitude earthquake struck Haiti, and its center was 7.5 miles away.

This earthquake is probably more severe than a magnitude 7 earthquake in Haiti 11 years ago, which killed dozens if not hundreds of thousands of people, destroyed buildings and displaced many.

Local media reported that at least 5 of them were children killed after the earthquake.

For his part, Haitian Prime Minister Ariel Henry said on his Twitter account that the earthquake caused "several deaths" and extensive damage in the southern parts of the Caribbean country.

Henry added that he would mobilize all available government resources to assist the victims, and appealed to Haitians to unite because they "face this tragic situation in which we live now."

Images posted on social media, verified so far, showed homes and part of a church in nearby Jeremy town being turned into rubble.

People in Cuba and Jamaica felt this earthquake, although there were no reports of material damage, deaths or injuries there.

The earthquake occurred more than a month after the death of the President of Haiti, Jovinel Moise, which led to political chaos in the country, and humanitarian organizations said the earthquake would add to the suffering.

We have 171 guests and no members online