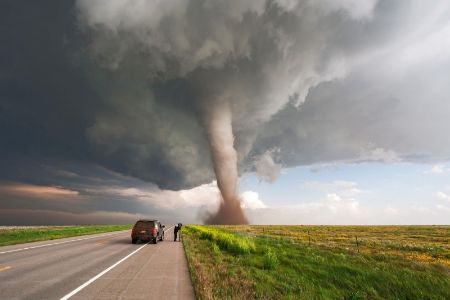 In a press conference, Louisiana Governor John Bill Edwards and the National Hurricane Center said the state was preparing for Hurricane Ida to reach land as a Category 4 hurricane and that it was expected to be a "life - changing" hurricane.

The Governor added that mandatory evacuation orders had been issued in areas of southern Louisiana and that the state was preparing for a prolonged power outage.

Residents of the most dangerous areas were quick to leave their homes and lined up in lines for essential goods as Louisiana prepared for Hurricane Ida, which is expected to become a Category 4 "high-risk" storm upon its arrival in the United States at the weekend.

The National Meteorological Authority predicted a "marine range threatening lives" when the hurricane reached land on the coasts of Louisiana and Mississippi, warning of "catastrophic wind damage." It appealed to people in affected areas to abide by the instructions of local officials.

The New Orleans Bureau of Meteorology tweeted, "It's time to act. It is now expected that Ida will arrive by the force of a Category 4 hurricane. "

The category is the second highest on the Saffir-Simpson ladder to measure hurricane winds, with the lowest speed of 209 km/h.

It should be noted that Louisiana declared a state of emergency in preparation for the storm expected to reach land in the United States Sunday, 16 years after the devastating Hurricane Katrina that first struck the state, plunged 80 percent of New Orleans and claimed more than 1,800 people.

Officials instructed the evacuation of residents outside flood protection dams in New Orleans and at-risk coastal towns on the state coast such as Grand Isle.

The declaration of a state of emergency approved by President Joe Biden will release additional federal funds and assistance to the southern state to enhance preparedness and response efforts.

The hurricane reached areas in western Cuba late Friday, with a Category 1 storm force accompanied by winds of up to a maximum speed of 130 km per hour.

Ida invaded Cuba in Pinar del Río State, the current focal point of the island's new corona virus. More than 10,000 people were evacuated while power was cut off just before the storm arrived.

In the capital, Havana, public transport service was suspended by midday and thousands of people were evacuated.

A shelter is being set up for those who have not been evacuated but do not want to stay at home, according to the Mayor.

The Meteorological Authority said the storm would likely be accompanied by heavy rainfall and "significant" flooding from southeastern Louisiana to the coasts of Mississippi and Alabama.

Scientists have warned against increasing the frequency of strong hurricanes at a time of warming ocean waters due to climate change, exacerbating risks to the world's coastal communities.

We have 61 guests and no members online