Hearing "resounding explosions" from the volcano of La Palma Island, one of the Canary Islands 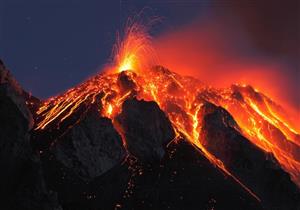 After the volcano "Cumbre Vieja" threw lava into the air, resounding explosions were heard across the island of La Palma, one of the Canary Islands

The lava flow has resulted in the spread of toxic ash in the area around the La Palma volcano, which has destroyed some 200 homes and evacuated residents from their homes, as well as leading to real estate losses of $102 million, the site of the real estate portal Idealista estimates.

Lava continued to flow at the foot of the volcano for the fifth day in a row to fall on homes, schools and farms, albeit at a slower pace than in previous days.

The black lava stream has been slowly moving westward since Sunday, burning everything it goes through, including homes, schools and banana farms, which are the main export commodity on the Spanish island.

The Federation of Spanish Banks offered the vacant premises held by the banks to those who had lost their homes as a result of the volcano.

Local authorities had alerted people to washing vegetables and warned against eating any foods contaminated with toxic ash.

We have 279 guests and no members online