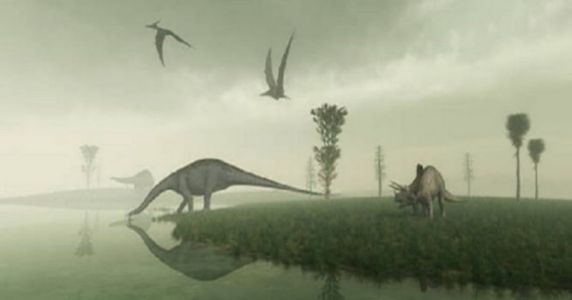 A study found that winged reptiles eventually became "fatal masters in the sky," but it took them 150 million years to reach this point.

And researchers from the universities of Reading, Bristol and Lincoln found that a series of steady improvements during this time led to improved flight skills in weak pterosaurs.

Terracons first appeared about 245 million years ago, and included a single species that could have a wingspan of 12 meters.

This creature, known as Quetzalcoatlus northropi, was the largest known creature flying in the sky, the size of a small plane.

The new research indicates that the evolution process among these flying reptiles took much longer than scientists previously assumed.

Tterosaurs were the cousins ​​of dinosaurs, and both groups were wiped out about 66 million years ago when an asteroid collided with the Yucatan Peninsula in Mexico.

"The tyrannosaurs were a diverse group of winged lizards, some the size of birds and others like a light plane," said the paper's author and evolutionary biologist, Chris Vendetti, from the University of Reading.

Although terracottas were ultimately famous for flying in the sky, the question of whether terrains had acquired the flight advantage and whether this gave them an advantage over their ancestors has baffled scientists for decades.

"There are many examples of how natural selection works on relatively short timescales, but until now it has been very difficult to establish whether plants or animals adapt to become more efficient over a long period of time," Vendetti added.

In their study, Professor Vendetti and his colleagues combined fossil records with a new flying model, based on today's birds, allowing them to measure the efficiency of 75 different species of pterosaurs and fill in gaps in our knowledge of their story.

"Our method has allowed us to study long-term evolution in a completely new way, and finally to answer this question by comparing creatures at different stages of their evolutionary sequence over millions of years," said Professor Vendetti.

The team's analysis revealed that flying reptiles underwent small, consistent improvements over generations, rather than experiencing sudden bursts of change, as previously suggested.

Terranes evolved from ancestors who inhabited the Earth in the early Triassic period, about 245 million years ago. Their oldest known fossils date back 25 million years later. From these fossils, the team measured the age, body size and wings of each species.

The researchers found that over time, the terracotta adapted its shape and size so that it could fly while spending 50% less energy even while increasing its body mass by up to tenfold. And some reptiles weigh nearly a third of a ton.

The team identified one exception to this rule, in a group called Azhdarcoid, which did not improve its flight performance over time.

Instead, these creatures, which included Quetzalcoatlus and Hatzegopteryx, seemed to be getting a survival advantage from their sheer size.

We have 65 guests and no members online