Lethal levels of radiation dash hopes about life in space 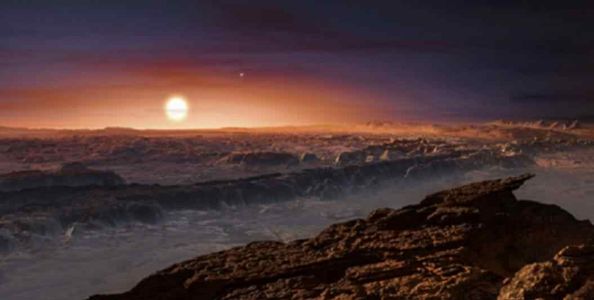 Life on other planets may be less likely than previously thought, after experts found worlds in the habitable zone of red dwarf stars exposed to deadly radiation.

Astronomers from the University of Sydney observed solar flares and radio explosions from the near star Centauri or Proxima Centauri to study the effect on planets in its system.

The red dwarf star is our closest neighbor to the stars, about 4.2 light years away, with a rocky planet the size of Earth called Proxima b within its habitable zone, indicating that it is possible for liquid water to flow and the planet to support life.

Since it is a star cooler than the Sun, the habitable zone is closer. New research revealed that nearby planets are bombed with deadly solar radiation, making life unbearable.

The red dwarf stars are the most common in the Milky Way, accounting for about 85% of the 100 billion stars in our galaxy, compared to 7% of the sunlike stars.

It is unlikely that life would form on planets orbiting these abundant but small stars, although this still leaves billions of sun-like stars that could have host worlds for life.

Australian researchers created the first weather forecast for our closest celestial neighbor to better understand the effect of a close orbit on the chance of life.

Unfortunately, reports from Proxima Centauri are not promising "to find life as we know it." And it would exclude the habitable areas closer to Earth, which would be around stars much smaller than the sun.

"Astronomers recently discovered that there are two rocky, Earth-like planets around Proxima Centauri, one of them within the habitable zone, where any water can be in liquid form," said study leader Dr. Andrew Zick, from Macquarie University in Sydney.

He added, "Since Proxima Centauri is a cold little red dwarf star, this means that this habitable region is very close to the star, that is, much closer than Mercury to our sun. What our research shows is that this makes the planets extremely vulnerable to the dangerous ionizing radiation that could potentially be Effectively sterilize it. "

"It appears that the most common stars in the galaxy, red dwarves, will not be great places to find life as we know it," said Dr. Zick.

We have 320 guests and no members online