Angel, Devil, and a Bloody Red Heart "at the South Pole of Mars 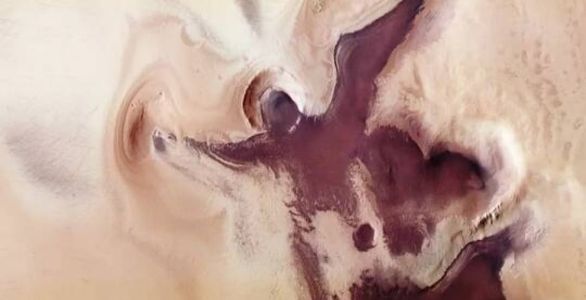 Mars is experiencing summer in its South Pole, and "angels and demons" can be seen playing out in a stunning new photo of the pole, taken by the European Space Agency (ESA).

Scientists say that demons are composed of dirt, just as they are on Earth, where demons of Mars dust are formed when a pocket of warm air suddenly rises through a column of cold air, creating a rotating upward motion.

These dusty cyclones can rise to 10 km. The tracks of one of these hurricanes can be seen in the darker region on the far left of the image released by the European Space Agency.

As for the "angel", for an explanation, we have to turn to heaven. When you take a closer look at the "halo" around the angel's head, you'll notice the steep walls of the impact crater.

According to a statement issued by the European Space Agency, this shock feature is the product of a collision of a meteorite that dug deep into the crust of the Red Planet, creating a crater and exposing the ancient sediment layers below.

These ancient layers take a dark red color and appear in this image through a distinctive "angel" shape, in addition to the heart-shaped structure below his right wing.

These dark and strange sediments were found all over Mars, and are believed to be the result of ancient volcanic activity buried for a long time under the Martian crust, according to the European Space Agency.

This image was taken by the European Space Agency's Mars Express spacecraft, which has been orbiting the red planet since 2004.

These mysterious structures near the south pole of Mars are only visible now because of the summer season, as the snow that usually covers the entire region with an ice sheet 250 miles (400 km) wide melts.