Apple Watch 7... Apple's new watch... What do you know about old versions? 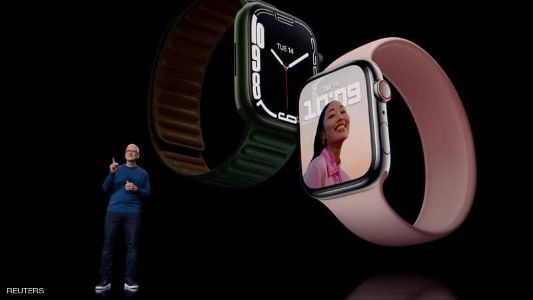 Apple America has unveiled the new version of its Apple Watch 7 smart watch.

That was during its annual conference, held last Tuesday evening.

The new Apple Watch features a slightly larger screen than the previous "Watch 6" version, which has advantages, as well as fast charging, and the new smart watch comes in 5 colors, including dark black, red and blue.

Indicating that the big screen does not mean more money, the new hourly rates start from $399, the same as the previous version of the hour.

In terms of shape, its shape is advanced from the older version with a brighter screen and is attached to a new type of belt.

The new Apple Watch format ran counter to expectations and rumors that it would be radical, as the format was slightly different, the same size as the previous version, but the new one was in the size of the screen space that came 20 percent larger than the Watch 6 and 50 percent larger than Watch 3.

Companies fear that a radical change in the shape of their products will be counterproductive.

Apple has reached an increase in the space allocated to the will while maintaining the same size by reducing clock limits, which means helping users read e-mails, and entering information.

In addition to increasing screen brightness, the crystal cover has been redesigned, to make it more resistant to cracking than before.

Watch 7 provides water resistance up to 50 metres deep, a feature of the Watch 6 clock.

Watch 6 offers many health benefits such as blood oxygen control, cardiac planning and other health services, making it difficult to add new benefits to Watch 7, which helps cyclists avoid falls.