Against the backdrop of the famous Parsaget case... Barcelona issues official statement on the storming of the club's headquarters by Catalan authorities 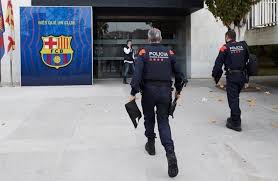 Barcelona Club issued an official statement about the storming of the club's headquarters by Catalan authorities on Monday morning and the arrest of former club president Josep Maria Bartomeu against the backdrop of the famous Parsajet case.

In its statement published on its official website, Barcelona Club said today Monday: "Before the authorities entered the offices at Camp Nou this morning, by court order, Barcelona offered its full cooperation to uncover the facts in this investigation."

In his statement, Barcelona added that "the information and documents requested by the police are fully linked to the case. Barcelona expresses its deep respect for the course of justice and for the principle of presumption of innocence of the persons involved in the case.

his statement is the first official response from Barcelona after police forces stormed the club's headquarters this morning, and a number of figures were arrested by the authorities, most notably Josip Maria Bartomeu, the former president of the club.

Units of the police force in the province of Catalonia searched the offices of the Barcelona Club, in what is believed to be a move related to the media - known corruption scandal "Parsajet," in the corridors of the Catalan giant last February.

Signs of scandal emerged last month, when Barcelona contracted a group of companies to improve its image through promotional campaigns on social media against people and entities believed to oppose Josep Maria Bartomeo, the former president of the Catalan Club, who resigned last October.

The Barsaget case was one of the main reasons for the strained relationship between Argentine star Lionel Messi and the Bartomeo administration, prompting him last summer to send Borovacs to the offices of Camp Nou about his desire to leave the Barcelona life club for free.