The European Cup. Despite her loss... Wales catches Italy to the final price and Switzerland to the waiting list 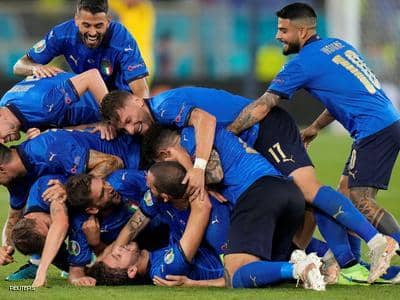 Despite losing to 0-1 Sunday in Rome, Wales knocked Italy to the final price of the 2020 European Football Cup, in the third round of the group stage, while Switzerland became the third on the waiting list to qualify.

Italy raised their tally to 9 points against 4 for Wales, which outscored Switzerland by goal difference, after the last win over Turkey 3-1 also Sunday.

The top four finishers in third place will also be the price of the final, but Switzerland will remain on the waiting list to find out whether or not it will qualify.

On the Olympic Stadium in the Italian capital of Rome, after securing qualification in the second round after two 3-0 wins over Turkey and Switzerland, Italy's coach Roberto Mancini relieved most of the first grade players.

Italy earned the full mark by winning their third successive continental championship, with a single goal in the lead for Wales.

The Italian team maintained a defeat-free record in 30 consecutive games, equalling a record between 1935 and 1939. Italy's goalscorer also did not enter a goal over 1055 minutes.

The first face-to-face meeting was at an official tournament, having previously met 9 times, with Italy winning 7 times and Wales winning 2 times.

In contrast, Wales made three major appearances to skip the group stage each time, as they did at the 1958 Mondale in Sweden, and the last edition of the 2016 European Cup when they reached the semi-final.