To support her country Tunisia in the Corona outbreak crisis.. Miss Jaber sells her bat at Wimbledon. 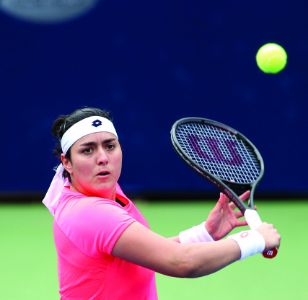 With a humanitarian gesture, the Tunisian tennis champion, Anas Jaber, put her bat on sale at the Wimbledon High Tennis Championships at a charity auction, in order to support her country in its current efforts to combat the new corona virus.

In a photo message she shared with her social media accounts, Jaber stated that the physical return from the sale of the bat would be allocated to the purchase of necessary medicines and medical equipment, and that the player would add a sum to the price at which it would be sold.

Anas Jaber asserted that the reason she decided to put her bat up for sale at a charity auction was because she was no different from any Tunisian or Tunisian: "Kai is Tunisian and Tunisian, and she can't see her country in difficult circumstances."

She continued: "We are all against Covid, my striker for my country, Tunisia, for a noble purpose."

Last Thursday, a spokeswoman for the Tunisian Ministry of Health announced that the country's health system had collapsed, with high - level care, medical fatigue and the rapid outbreak of the Corona pandemic.

It is reported that, last Monday, top 24 Tunisian player Anas Jaber qualified for the final quarter of the Wimbledon tennis tournament.

Anas Jaber, the world's ninth-ranked Polish Ija Chiantek, beat two sets to one, after an hour and 41 minutes of play.

At the price of the final of the Wimbledon Tennis Championships, Tunisia's Anas Jaber turned her delay before the Polish group into a 5-7, 6-1, 6-1 victory, reaching the quarter-finals in a historic Arab achievement.

We have 164 guests and no members online