The world's leading ball stars and how did they appear at the Olympics? 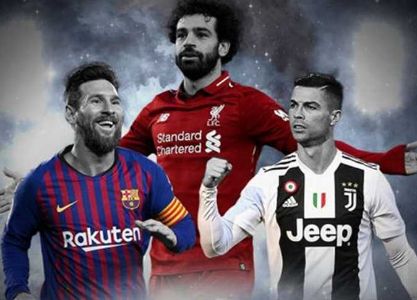 Following up on the first steps of a number of players who later emerged and became among the best in the world, particularly with the launch of football competitions at the 2020 Tokyo Olympics, the masses are regaining the memories of this global event.

And so we're monitoring what the most outstanding football stars have done during the Olympics, in recent decades.

In the event that represented his first acquaintance card with the world's football audience, Liverpool's English star Mohamed Salah appears at the 2012 London Olympics, after the 20-year-old successfully performed, especially in facing Egypt in the group stage, which ended in a 3-2 victory for the Samba Dancers.

Salah topped the London Olympics scorers list with 3 goals, and then moved to Basel, Switzerland, to continue his career, during which he managed to place himself on the list of the world's best players.

After leading his country to win the 2005 World Youth Cup, the Argentine public looked forward to what Lionel Messi would do with the tango dancers at the 2008 Beijing Olympics, amid high hopes for a gold medal.

The Argentine team had a special team at the offensive level, led by Messi, Ángel de María and Sergio Aguero.

Indeed, Argentina succeeded in clinching the gold medal at Nigeria's expense in the final, with a clean goal by Di Maria in the same way he scored the goal to beat Brazil in the Copa America final days ago.

Brazil and French star Paris Saint-Germain, Neymar, competed for the first time with Brazil at the 2012 Olympics.

Neymar, then a Brazilian Santos player, performed with the samba dancers, contributing 7 goals during Brazil's championship run, which ended with a silver medal after losing the final to Mexico by 1-2.

In 2016, Neymar prepared to lead Brazil's first gold medal in its history, following his major performance during the Rio de Janeiro Olympics, where he also contributed 7 goals.

The owners of the land had already succeeded in taking the gold after winning Germany in the final tournament by kicks.

Portuguese legend Cristiano Ronaldo participated, with his country only once at the Olympics, in 2004, in Athens.

Portugal left the tournament early from the group stage, after winning only Morocco by two goals to a goal, one of which was Ronaldo, then a Sporting Lisbon player, who was only 19 years old.

The match of Portugal led by Ronaldo in front of the Black Rafidain, who defeated Portugal by a score of 4.2, remains in the memory of the Iraqis at a location where there was an altercation between Eldon and the star of Iraq's attack, Younes Mahmoud.

The 1996 Atlanta Olympics saw Ronaldo participate first with his country in the tournament, aged 18.

Ronaldo delivered a remarkable performance, successfully taking the lead of the tournament's goalscorer list in partnership with Argentine star Hernán Crispo, with 6 goals each.

Brazil took the bronze medal with that edition, after beating Portugal in the third and fourth clean-cut pentathlon positions, run by Egyptian referee Jamal El Ghandour.

French football legend Michel Platini successfully performed during his only Olympic participation, in 1976.

Platini scored 3 goals as the Roosters' leading scorer in the tournament, which the French early in the quarter-finals, after losing to East Germany with a clean quadruple.

We have 164 guests and no members online