Suspension of the Argentina-Brazil match for an unspecified time 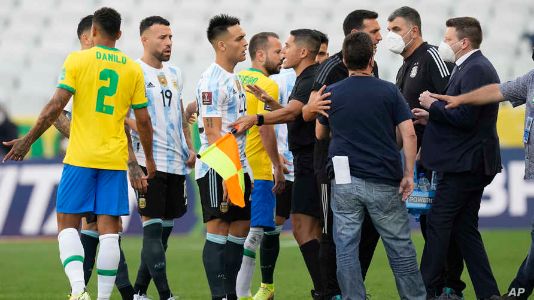 On the stadium of Reina Corinthians, the Brazil-Argentina match, held in São Paulo, in the South American qualifier for the World Cup, was stopped after a surprise appearance by the Brazilian Ministry of Health staff to prevent 4 Argentine players from completing the meeting.

The players were surprised by the Brazilian health staff inside the stadium to take out the Argentine quarterbacks, Emiliano  Martínez, Buendia, Lo Celso and Romero, and prevent them from completing the meeting, on the grounds that they had joined their country's Red List team, without being quarantined.

Brazil treats England, which places it on the Red List of States experiencing a similar outbreak of the corona virus and also places it on the same list and demands that arrivals submit to quarantine for 10 days.

With the four players refusing to leave, it was finally decided to suspend Argentina and Brazil in the 2022 FIFA World Cup qualifiers and postpone the meeting for another unspecified time.

It should be noted that in the history of football, no match has ever been suspended or cancelled for a similar reason.

For his part, the South American Football Federation confirmed the suspension of the samba and tango match by decision of the referee, and said that the referee and the matchmaker would submit a report to the FIFA Discipline Committee in order to take appropriate steps.

This meeting was held in connection with the eighth round of the South American qualifiers for the "Qatar 2022 Mondial."

We have 318 guests and no members online