Salah and Ronaldo... And a limitless thriller in the Primerlig. 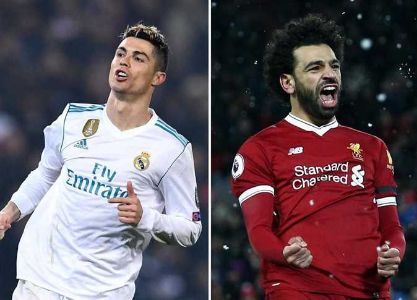 Salah enters the top 100 of the competition, placing fifth on the list of fastest members.

It is reported that although Cristiano Ronaldo, the returning star of Manchester United, has fought 197 games in the Primerlig so far, he has not succeeded in reaching Salah's number, i.e. he has not broken into the 100.

With his two goals at Newcastle, Ronaldo has raised his English Super League scoring balance to 86, separating him only 14 goals from the 100 to win membership number 31, but may be preceded by Liverpool's Sadio Mane, who has scored 97 goals in 233 appearances.

Salah has already broken Ronaldo's number as the most scored player in a single season in the Primerlig, scoring 31 goals in the 2007-2008 season, after the Egyptian scored 32 goals in the 2017-2018 season.

If Ronaldo were to enter the 100th Club, the race would remain with Kane, with the trio seeking to take forward positions in the historic race for the winner of the competition, with Sherard leading with 260 goals.

Salah's figures in the Primerleg, and Ronaldo's overall run, tell of a limitless thrill this season in the English Premier League, between two of their country's football legends and their clubs.

We have 186 guests and no members online