A German cyclist taking his fifth world title. He's picking up the gold medal for the road race 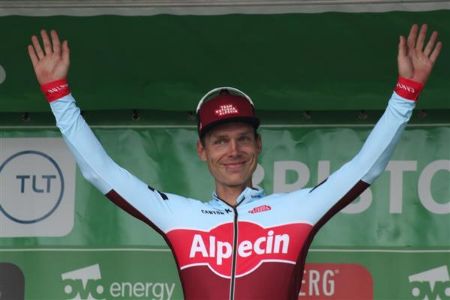 Veteran German cyclist Tony Martin finished the best of his career, after his fifth world title in his career with the game, after leading the German team to a gold medal for the road race against a mixed relay of teams, at the current World Championships in Flanders, Belgium.

Martin collaborated with Max Walshed and Nikias Arndt in the first race for men, before Lisa Klein, Lisa Brennauer and Mickey Krueger, who won gold for the women's team pursuit at the recent Tokyo Olympics, took over the ladies' race for the gold medal.

The German team finished the race in 50 minutes and 49 seconds at the track, which is 44.5 kilometers tall, while the Dutch team, which included women's world champion Elik van Dyke and Olympic champion Annemike van Vleuten, took the silver medal, coming in second by 12 seconds behind its German counterpart.

After surpassing his Swiss counterpart, the Italian team picked up the bronze medal thanks to Fabio Jana's mascot in the men's class.

This was the last race in Martin's 36-year-old athletics career, which won four men's world titles in his career, as well as a silver medal at the Olympics and several stages at the French Cycling International.

This achievement makes up for Martin's failure last Sunday in a race against the men's clock at the current World Championships, where he only took sixth place.

We have 158 guests and no members online