The Champions League. Ronaldo and Date with Breaking History Tonight 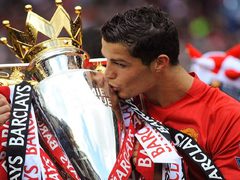 In his Manchester United team's match against Villarreal scheduled for today's Champions League group stage, Cristiano Ronaldo will have an opportunity to add a new number to his record game.

After his Manchester United match with the Young Boys about two weeks ago, Ronaldo equalized the record for Spanish legend Iker Casillas, the most capped player in the UEFA Champions League.

The Portuguese has become the most capped player in the UEFA Champions League with 177 matches on a par with the relegated keeper.

The Portuguese star can break Casillas' number, singling out a new record in his favorite competition, when he faces Manchester Villarreal this evening.

Ronaldo is the historic scorer of the Champions League, scoring 135 goals, outscoring Lionel Messi with 121 goals, and third-placed Polish Robert Levandowski with 73 goals.

We have 278 guests and no members online