After the health minister's statements... The Corona crisis is stabbing Turkish tourism. And expectations for tragic results. 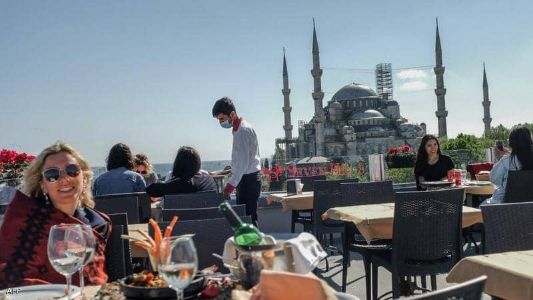 After announcing that the number of Corona sufferers in the country has doubled in less than two weeks, and that a new wave of the disease will face Turkey, Turkish Health Minister Fakhruddin's remarks constituted a shock pot for the country's tourist sector.

A few hours after the Qoja tweet, hotel reservations and tourist areas fell by less than half, while tickets to Turkey fell directly, at a time when Israel's Cabinet announced a ban on travel to Turkey as the first country to do so, with more than a third of Israeli tourists taking their summer leave in Turkey due to geographical proximity and low prices.

The Turkish Ministry of Health said last Thursday there was the highest rate of casualties in months, with 9586 cases of "Koveed 19," which prompted the Ministry to announce a state of preparedness in the health sector.

For residents and tourists in Turkey, however, there has been a daily build-up of injured people, as was the case last April. Increases have continued to reach 60,000 per day. The Turkish government was able to control the wave only through a strict and complete closure of all walks of life, which has dealt a blow to the tourism and economic sector, increased inflation levels and reduced the value of the Turkish lira by almost a quarter in just two months.

Turkey's health, tourism and financial community also fear that the new wave will be associated with HIV mutants, such as the rapidly spreading Delta strain.

Regional Director of Antalya and Alania regions of the Turkish company Noh Tourat Bahiuddin Ozdemir, whose company provides tourism services to the suckers from Israel and the Balkans, told Sky News Arabia: "Since the Israeli government announced its decision to ban travel to Turkey, almost 60 percent of Israeli recoverable reservations have been cancelled, while there are reports that European reservations will enter the process of being cancelled and retreated as of early next week.

Ozdemir continued: "We know full well that the Turkish government is confused, and the tourist sector is expected to be the ultimate victim of the government's policies. Closure is the only solution available to it, so it will be the second year of the matter, so we will lose and lose about one fifth of its resources, and more than one third of the hard currency flowing into the country, as all other economic sectors decline due to sanctions."

Observers of the Turkish scene were surprised that recent statements by the Turkish Minister of Health contradicted successive figures by his own ministry, which officially said it had given 65 million doses to the population, and 22 million of the nearly 40 million people eligible for vaccination had received full vaccination.

According to these figures and ratios achieved, Turkey must be protected from sudden upward waves, such as in Belgium, Germany and Italy, where vaccination ratios are close to what the Turkish Ministry of Health claims to have achieved.

We have 112 guests and no members online