Charlie,Hebdo angry with a cartoon of Meghan Markle and the Queen of Britain. 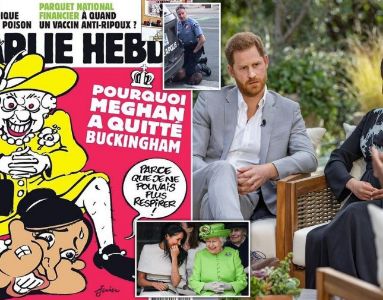 The French satirical magazine "Charlie Hebdo" has created outrage online over a caricature of Meghan Markle, the wife of British Prince Harry.

The front - page cartoon of the French magazine shows Britain's most recent Queen Elizabeth II kneeling smiling on Meghan Markle's neck, in a visual reference to the murder of an American citizen, George Floyd, by US police last summer.

"Why Meghan Markle left Buckingham Palace... Because I couldn't breathe. "

Meghan Markle's satirical cartoon on "Charlie Abdo" was widely condemned on social media, with Halima Begum, executive director of a British anti - racism research foundation called The Runnymede Trust, describing the cartoons on her Twitter account as "wrong at all levels."

Begum tweeted: "Charlie, I look like this is wrong on every level, Queen of Britain, like George Floyd's killer crushing Meghan & apos neck? And the last one says she can't breathe? That's no laughing stock, no offense. "

While the British activist group Black and Asian Lawers for Justice described the cartoon as "fascist and disgusting racism," it said it "shock George Floyd for material profit."

The publication of Meghan Markle's sarcastic cartoon comes days after she and her husband, Prince Harry, accused the British press as well as the royal family of racism, telling the American media, Oprah Winfrey, in a shocking TV interview that there are concerns within the royal family about the colour of their child Archie's skin.

The Royal Palace responded to Meghan Markle and Prince Harry's claims earlier this week, writing in a statement that the issues surrounding race raised in the interview were "troubling."

The palace said: "The whole family is saddened to learn the full extent of how difficult the last few years have been for Harry and Meghan, and while some memories may differ, they are taken seriously and will be taken alone by the family."