Through video technology... Putin and Xi are giving the green light to build 4 Russian-style nuclear power units in China. 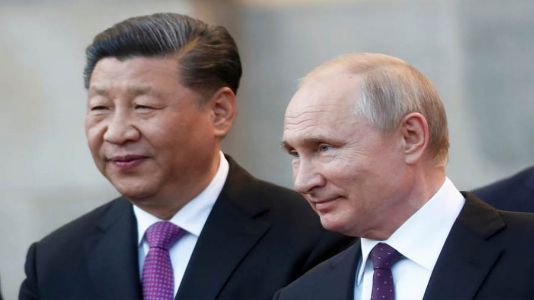 Russian Presidents Vladimir Putin and Chinese Xi Jinping, via video technology, gave the start - up signal for the construction of new power units at two nuclear power stations in China.

Agreement to implement these projects was reached during negotiations between the two leaders in Beijing in June 2018.

Based on a contract concluded between the Russian and Chinese sides on 7 March 2019, the seventh power unit at Tianwan Station is scheduled to operate in 2026, and the eighth power unit in 2027.

The new power units will be built by CNNC in cooperation with Russian company Ross Atom, and the Russian side will be responsible for the design of buildings and structures related to nuclear installation, safety and control systems, the supply of basic equipment, the provision of engineering services during installation and operation, as well as technical assistance.

The power units will be equipped with Russian VVER- 1200 reactors, which are third generation (3 +) reactors.

During the construction launch ceremony, Russian Deputy Prime Minister Alexander Novak said that cooperation with China in the nuclear field was a strategic priority for the Russian energy sector.

In turn, Russian nuclear company Ross Atom General Manager Alexei Lekhachev said that equipment for China's nuclear power plants would be manufactured faster than the contracts, despite epidemiological constraints and the repercussions of the Corona crisis.

We have 151 guests and no members online