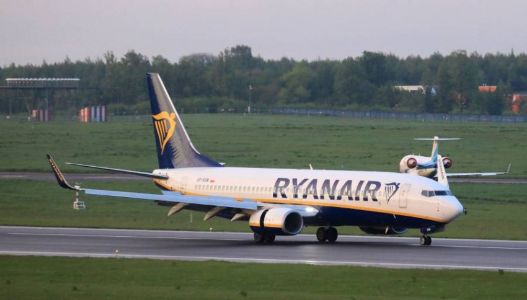 Belarusian authorities intercepted a civilian aircraft in the country in order to arrest a journalist on board, which led to the arrest of a journalist.

Angry reactions continued towards the Belarusian authorities, which was considered a violation of navigation regulations.

The Belarusian journalist, Roman Protasivić, was on his way from Athens to Vilnius, the capital of Lithuania, when the plane was forced to land in Mensk, the capital of Belarus, and there he was arrested.

In the most recent response, the spokesman for the Secretary-General of the United Nations said that Antonio Guterich was in favour of an "independent investigation" into the aircraft in Belarus.

The speaker added that Guterich "supports the calls for a fully transparent and independent investigation into this disturbing incident and urges all concerned parties to cooperate with this investigation," in a "badge of what was being done to the aircraft of Rhine Air, which was carrying a Belarusian opponent, who was arrested.

In a statement, Stefan Dujarek said that the Secretary-General was "deeply concerned about the seemingly mandatory landing of a passenger aircraft in Belarus and the subsequent arrest of journalist Roman Protasivić.

The International Civil Aviation Organization (ICAO) announced that it would hold an emergency meeting of its administrative board after Belarus intercepted a commercial flight of Ryan Air.

The organization expressed "serious concern about what appears to be a mandatory landing of the Ryan Air aircraft and its passengers, which is contrary to the Treaty of Chicago," which regulates civil aviation.

Many European capitals and airlines have blackened Belarus's airspace, in the light of increasing international pressure.

The former Soviet Republic accused of "piracy" and the practice of "State terrorism" received the support of its Russian ally, asserting that it had acted entirely in legitimate form.

The mission of the International Civil Aviation Organization (ICAO) is to establish rules governing civil aviation without the authority to impose sanctions.

The European Union was exploring how to respond to the incident, and might resort to tighter sanctions already imposed on the former Soviet Republic.

As tensions escalated in the region, both White Russia and Latvia said they had decided to expel the ambassadors.

We have 335 guests and no members online