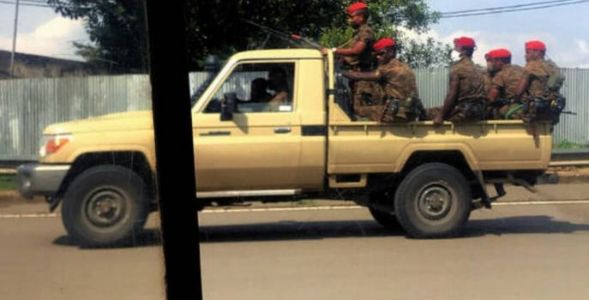 The United Nations has warned that 9 million people are threatened with displacement from their homes due to the ongoing conflict in the Tigray region in Ethiopia, adding that Addis Ababa's declaration of a state of emergency prevents the arrival of food and other aid.

The United Nations Office for the Coordination of Humanitarian Affairs said in a report released on Saturday that about 600,000 people in Tigray are dependent on food aid, while another million are receiving other forms of support, all of which have stopped.

The report stated that clashes between federal and Tigray forces erupted in eight locations in the region.

A relief source told "Reuters" today, Sunday, that six militants were killed and more than 60 wounded in clashes near the border between Tigray and Amhara provinces. The two sides incurred losses and transported some of the wounded to hospitals in or near Gondar town, the source said.

The United Nations report stated that the desert locust infestation in East Africa has particularly affected Tigray and there are concerns that efforts to control locusts have been halted due to the conflict, threatening to inflict greater damage to crops.

On Saturday, Ethiopian Prime Minister Abiy Ahmed spoke with UN Secretary-General Antonio Guterres, who "offered his good offices." Guterres also spoke with Musa Faki Mahamat, president of the African Union, as well as with Abdullah Hamdok, the Sudanese prime minister, in his capacity as head of the Intergovernmental Authority on Development for East African States (IGAD), a spokesman said.

In another measure to delegitimize the Tigrayan regional government that was elected in September in a move that ran counter to the recommendations of the federal government, the Ethiopian parliament agreed on Saturday to form an interim government for the region.