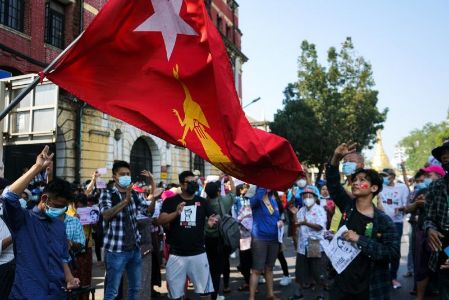 In a twist of events in Myanmar and following the escalation of protests, at least 17 people were killed, today Sunday, in Myanmar during clashes between police and demonstrators in protests against the recent military coup, according to local media reports.

Of the victims, four were killed in Yangon, Myanmar's largest city, four fell in the southeastern city of Dawi, three in southern Bagu, two each in northern Mandalay and Bakuku, and one each in Meek and Moulameen.

Tens of thousands of people took to the streets in several cities across Myanmar, today Sunday, as mass demonstrations against the February -, military coup entered its fourth week.

After a series of quiet protests, tensions between demonstrators and the police appeared to be escalating, over the past few days, as law enforcement officers turned to more brutal tactics.

It should be noted that on February 1, the Myanmar army overthrew the Government and declared a state of emergency for a year, hours before the newly elected Parliament. State Councillor Aung San Suu Kyi and President Win Mint were arrested, along with other senior officials accused by the military of electoral fraud.

We have 559 guests and no members online