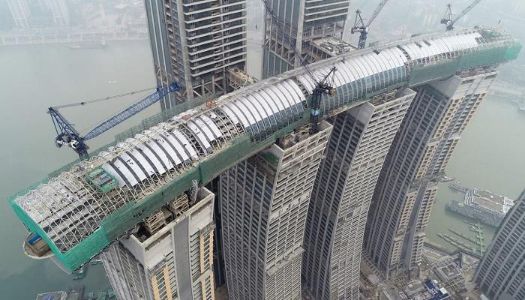 There's a lot of buildings in the world that are surprising because they're designed in extraordinary ways, and of course it's not really going to materialize until a great deal of effort by innovative architects.

In China, an idea has been unveiled that has changed all traditions of construction and expansion horizontally rather than vertical in a step that is the most bizarre in the history of global real estate. China has successfully built its eighth and final skyscraper, the Raffles City Project in Gambling City, Shongqing, which consists of eight riverside skyscrapers, two of which are 350 metres high, the other six 250 metres high, and another 300-metre horizontal skyscraper to connect the other eight skyscrapers.

The Raffles City Project is a large skyscraper with a length of 300 meters that supports its curved structure at a height of 250 meters with four multi-use towers, including offices, apartments, hotels and stores. A pair of high towers (350 m) connect them to two less high space bridges. The total number of towers in the project is eight.

A steel structure of up to 12,000 tons has been used in the construction of the horizontal skyscraper, which is equivalent to the total weight of the Eiffel Tower in France, and includes a 50x8m main swimming pool and a 10x8m children's pool.