Amidst the increased flood risk in several states.. India uses its maritime fleet for relief and rescue operations 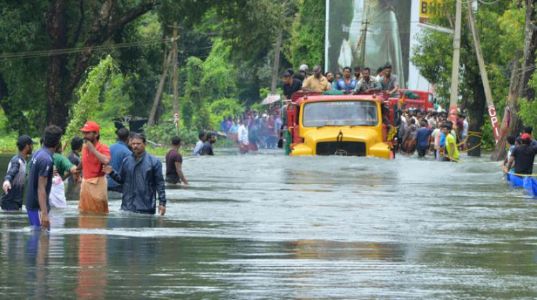 As flooding worsened in several states, the Indian Ministry of Defence said it would use its naval fleet for relief and rescue operations.

The Indian Ministry of Defence explained that, with large parts of the states of Maharashtra, Karnataka and Jwa having suffered extensive flooding in both urban and rural areas, due to the ongoing rains and subsequent flooding of rivers and dams over the past few days, the Western Naval Command of the Indian Navy has mobilized significant resources to provide assistance to state and provincial administrations in the affected areas.

Seven marine flood rescue teams were deployed to a number of areas in western Maharashtra on 22 July.

She noted that a Siking 24C helicopter had been mobilized for aerial reconnaissance.

The Panel evacuated more than 100 people stranded in the villages of Sengoda and Bahir.

All teams were on high alert in Mumbai in case immediate deployment was needed.

Heavy rains hit many western states in India, causing massive flooding. In Maharashtra, at least 112 people died as a result of those floods.

Today, Saturday, rescue teams in India encountered difficulties in reaching dozens of flooded homes, where mud and rubble were caused by heavy monsoon rains in the country, bringing the death toll to 125.

According to experts, Maharashtra State is experiencing the most rainfall in the meantime in 40 years, with risks of flooding of major rivers.

Several regions around the world have finally experienced adverse weather conditions, with floods in China and Western Europe and hot waves in North America, raising concerns about the impact of climate change.

We have 96 guests and no members online