Thailand .. The largest political opposition party calls for the government to leave 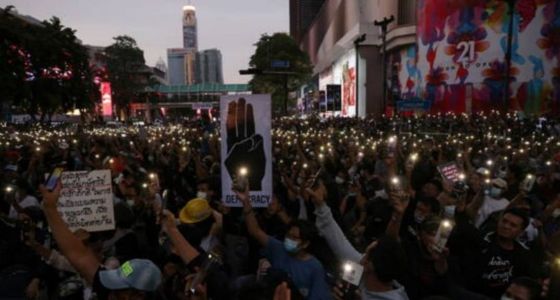 Thailand's largest opposition political party on Monday demanded the resignation of Prime Minister Prayut Chan, in conjunction with the start of a parliamentary debate on the popular protests that have been going on for months.

The protesters, led by university students, are calling for constitutional reforms and reducing the powers of King Maha Vajiralongkorn, in addition to calling for the departure of the current government led by Prayut.

The government has so far failed to calm the demonstrators and persuade them to return home, as well as its failure to impose a state of emergency in the middle of this month to prevent protests, while the tension between the two parties and the popular anger expressed by the marches of tens of thousands of citizens in the capital, Bangkok, have become a common sight.

The opposition does not place any hopes on the parliamentary session that discusses the issue of protests, because Prayut’s supporters control the majority. The conciliatory tone of the prime minister did not convince them in his opening speech of the session when he said, "I am confident today, regardless of the divergence of our political views, that everyone still loves this country." On top of that, the opposition is convinced that the prime minister has the support of the military establishment, and they accuse him of helping it tighten its grip on power in the 2019 elections, while Prayut denies this and confirms the integrity of those elections.

We have 63 guests and no members online