On the Unity Day, Putin reminds citizens of their duties before the homeland 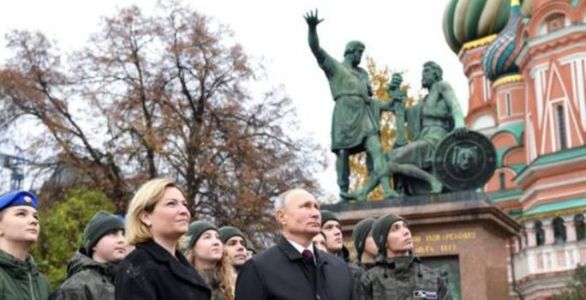 Today, Russia celebrates the "Day of Popular Unity" on the occasion of the anniversary of the Russian Popular Resistance Units led by Kuzma Minin and Dmitriy Bogarsky expelling Polish forces from Moscow on November 4, 1612.

On the occasion of this holiday, which was officially adopted in 2004, President Vladimir Putin, accompanied by the Minister of Culture, Olga Lyubimova, and representatives of youth organizations, placed a wreath at the monument to Minin and Bogarsky in Red Square in central Moscow.

The president also heard the sound of 23 new bells that had been set up in the clocks at Spasskaya Tower, the main tower in the Kremlin wall.

Putin discussed with the attending youth their future plans, noting the need to find a balance between citizen rights and duties.

He said, "The citizen should know his rights and ask the state to implement them, but everyone has duties as well."

We have 45 guests and no members online