A security operation in Mosul ... and a new blow to "ISIS's tails" 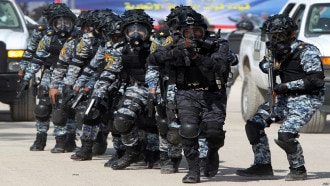 The Iraqi authorities announced the arrest of 7 ISIS members who were planning to commit terrorist attacks in the city of Mosul in northern Iraq.

He added that his forces "managed to arrest 7 terrorists wanted by the judiciary, who were planning to reconstitute them with a cell to target the city with terrorist attacks."

Iraq embarked on an intense security and military campaign in the wake of the twin attack that took place in the capital, Baghdad on January 22, which resulted in the death of 32 people and the injury of more than 100 others.

"ISIS" adopted the double attack, while observers say it is an attempt by the terrorist organization to establish its presence again in Iraq.

The operation constituted a major security breach in Baghdad, which has not witnessed suicide attacks for years.

The Iraqi Prime Minister, Mustafa Al-Kazemi, was quick to announce rapid measures, such as the dismissal of a number of officials, tightening security measures in Baghdad, and the launch of military operations against ISIS hideouts in the rugged areas of Diyala and Salah al-Din provinces.

Iraq declared victory over "ISIS" at the end of 2017, after it expelled its militants from civilian areas, but militants from it took refuge in desert and remote areas that the organization exploits to launch attacks from time to time.

We have 67 guests and no members online