After the recommendation of the defense and the police, although officially cancelled... An Israeli party leader and a deputy in the Knesset intend to organize a "media march" in Jerusalem. 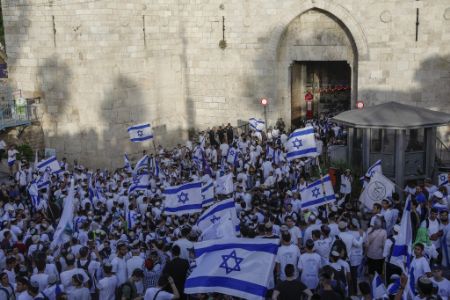 Despite being cancelled by Israeli police earlier today. The president and deputy of an Israeli party in the Knesset announced their intention to organize a "media march" in East Jerusalem.

In a tweet on his Twitter account, he said: "I do not intend to surrender, and next Thursday I will cut off the entire (march) route around Jerusalem's Old Town."

Ben Ghaffer concluded by saying: "I invite the members of the Knesset to join me and to embody our strength and Israel's sovereignty in Jerusalem."

It was not long before the Knesset MP May Gulan announced the Likud Party, joining the leader of Aotsma Yehudit.

In a tweet, Gulan said: "This happened (the march was cancelled) because we have a weak defense minister, we know that, but frankly I didn't expect the Israeli police to be afraid to wave Israeli flags in our capital," she said.

The Knesset deputy added: "I plan to walk next Thursday with my Knesset friend Ben Gaffer with as many Israeli media as possible. We will not award these Arab hooligans and cowardly politicians. We will preserve our Jewish sovereignty in Jerusalem.

Earlier Monday, Israeli police announced that the march had been cancelled after a security assessment.

"With the current course and date announced, the event will not be approved," the police said in a statement. If the organizers decide to change the outline and/or the date, the subject will be examined as usual. "

Yesterday (Saturday), Israeli Defence Minister Benny Gants held security and military deliberations regarding the extent to which Israeli police and military allowed the "media march" to take place in the occupied city of Jerusalem.

At the end of the meeting, Ghantas recommended the cancellation of the march carrying Israeli flags, which was to take place in East Jerusalem through the door of the Pole, one of the doors of Old Jerusalem.

It should be noted that last Saturday the Hamas leader in the Gaza Strip warned Israel not to "re-attack the Al-Aqsa mosque," adding that "the resistance would burn the land above the head of the occupation if it returned to that."

We have 31 guests and no members online