A storm session for the Knesset... Chaos, exchange of insults and expulsion of members during the inauguration of the Israeli government 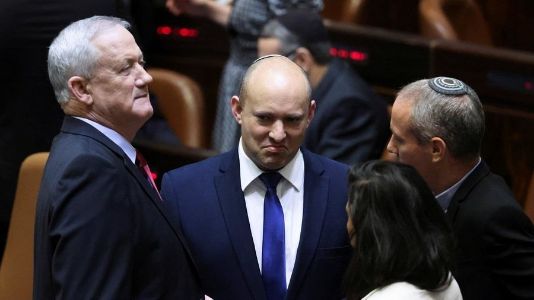 During the inauguration of the new Israeli government, headed by Naftali Bennett, this evening's session of the Israeli parliament, the Knesset, witnessed chaos and an exchange of insults.

The "Hebrew Channel 13," this evening, reported that today's Knesset session was stormy, and there was chaos, as a result of some members of the Knesset boycotting Bennett's speech, accusing him of "lying, fraud and rudeness," during the inauguration speech.

The Hebrew newspaper Haaretz reported that Bennett's speech had experienced chaos and had been interrupted, more than 10 times, by the boycott and insults that had plagued Bennett's Knesset members returning to the parties of the camp of the outgoing Israeli Prime Minister, Benjamin Netanyahu.

For its part, the Israeli Broadcasting Corporation reported that Bennett, the mandated Prime Minister, had been forced to suspend his speech in the Knesset for more than 10 times following a succession of screams and insults from parties close to Netanyahu, prompting 10 Knesset members to be removed from the Chamber of the Israeli Parliament, as a result of their refusal to stop yelling and insults.

In his speech, Israeli Prime Minister Naftali Bennett had confirmed that his country would not allow Iran to possess nuclear weapons.

In his Knesset speech during the vote on a new Israeli government in the country, which in turn ends the entire 12 years of Benjamin Netanyahu's rule, Bennett stressed his country's rejection of any nuclear agreement with Iran, calling it a "big mistake."

On Sunday evening, Israeli Army Radio Glay Tsahal reported on Naftali Bennett, from the heart of the Israeli Knesset, that renewing the nuclear agreement with Iran was a major mistake, claiming that the nuclear agreement would allow Iran legitimacy, which Bennett considers "one of the most violent regimes around the world," threatening that Israel would be free to act, without referring to something.

Naftali Bennett stressed that his new Government would begin a new chapter with Israel's Arabs, stressing his country's continued policy of supporting settlement in all regions of the country, as well as the Israeli army's increased defensive and offensive capacity, claiming that security threats had not ceased.