Abdel Fattah Rajab is an Egyptian engineer with the highest decoration of the Emperor of Japan. Identify Causes 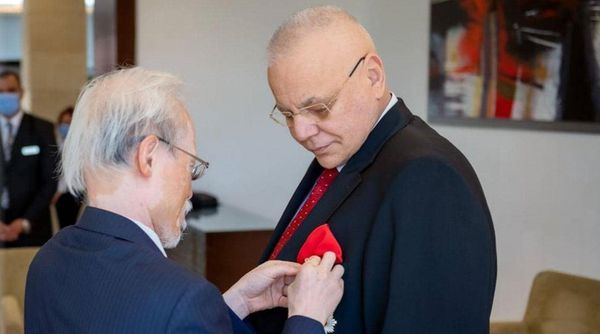 The Japanese Ambassador to Cairo, Noki Masaki, the Egyptian engineer Abdel Fattah Rajab in the highest Imperial Order, paid tribute to his great achievements towards the developing Asian country.

Due to his efforts to sponsor the Japanese and support companies from their country and his prominent role in a number of educational and economic projects, the Japanese Embassy in Cairo announced the handover of the Distinguished Medal to Rajab, formerly the Honorary Consul General of Alexandria.

Rajab recalls that he was pleased with the honors and great hospitality he received from the Japanese Ambassador during the receipt of the Ancient Order, explaining that he had received the news for many months "but that the meeting and the medal could not be completed because of the Corona virus crisis."

Rajab says: "During the meeting and the ritual of the medal, the Ambassador informed me that the Emperor of Japan gives it to the great contributors in various fields, so I was proud to represent my country honourably through unique honors."

The Government-wide cooperation relationship between Rajab and Tokyo began when Japan announced in 2002 that it needed an honorary consul in Alexandria to represent it in Egypt, and after two years of research, scrutiny and consultations, it chose Rajab, a businessman who owned a number of companies, to take over, for considerable experience in dealing with the Japanese.

The Government-wide cooperation relationship between Rajab and Tokyo began when Japan announced in 2002 that it needed an honorary consul in Alexandria to represent it in Egypt, and after two years of research, scrutiny and consultations, it chose Rajab, a businessman who owned a number of companies, to take over, for considerable experience in dealing with the Japanese. 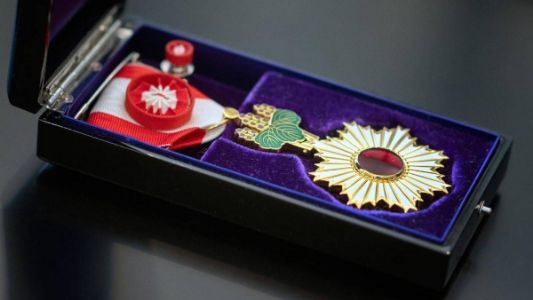 "I did not aspire to the position as much as I did to cooperate with the Japanese, living in their country for a long time during the 1970s, approaching their culture and customs, learning their language, getting to know them personally and professionally, and having partnerships in different industries such as automobiles, diggers, etc."

Rajab adds: "Since receiving my work in 2004, I have worked to provide a good climate for the Japanese to invest in Egypt and to develop effective partnerships with the State and the private sector. I have made a great effort to explain the Egyptian economy and government laws and to inform them of the steps required to enter the Egyptian market, as well as to remove obstacles to them. "

The former Honorary Consul General of Alexandria recalls: "I also had contributions in the field of education, including the establishment of the Egyptian-Japanese University. I attended all the constituent meetings of this entity and participated in coordinating with the then Minister of Higher Education and the State for scientific research and following up on all the steps until the experiment came to light, which was also done in the Japanese Schools Project."

Egyptian President Abdel Fattah al - Sisi witnessed the opening of the Egyptian University of Science and Technology in the Arab city of Burj, Alexandria, in September last year, and named Shinzo Abe, the former Prime Minister of Japan, the university's new phase in recognition of Tokyo's efforts and support for Egypt in making progress in the educational field.

He notes that he sought to consolidate relations between the Egyptian and Japanese Governments during his time in office, his ongoing visits to Tokyo, his attempt to show Egypt in its rightful place, and to highlight Cairo's steps towards development and investment.

The man continued to perform his work in an official manner until 2011, when Egypt issued a decision to abolish the work of honorary consuls within the country and to inform all foreign countries, but for years Rajab had been assisting the Japanese in Alexandria and all provinces with great sincerity.

Regarding his vision for the future of cooperation between the two countries, Rajab considers that "Egyptian-Japanese relations in the current period are very prosperous," noting Sisi's interest in expanding engagement with Japan as a major and influential economic state, as demonstrated by the mutual meetings between the two Governments in recent years.

According to Ambassador Noki Masaki, trade between Egypt and Japan amounts to more than $ billion a year.

At the forefront of cooperation between the two countries is the automotive, electronic and agricultural industries, while emphasizing that Japanese companies can contribute to the development of the Egyptian economy.

Rajab expects close partnerships between Cairo and Tokyo in several areas, such as electricity, water, infrastructure and technology, which will benefit all.

He concludes: "Don't take it you get the ultimate medal. I intend to continue to serve as a bridge for communication between Egypt and Japan, supporting Japanese companies that are considering working within my country. "

We have 146 guests and no members online