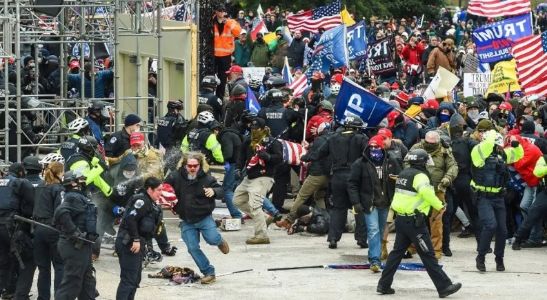 An officer is breathing ... and the capitol police chief resigns

The number of victims who were killed on the night of the storming of the Capitol building in the American capital, Washington, DC, rose to 5, after the Capitol Police announced late last night that an officer named Brian Skink died of his wounds.

She explained “The officer Skink was trying to stop the riots in the Capitol building , but he was injured during a clash with the demonstrators” and he died on Thursday evening.

Stephen Sundd, decided to resign from his post, due to the events in Congress, and the way the police dealt with the process.

CNN quoted a police spokeswoman as saying that the last day for a bond in the business is January 16, four days before Biden's inauguration. Several lawmakers and security experts had criticized how the police dealt with the riots, and the lack of preparation for such an eventuality despite the announcement of the Trump supporters' demonstration more than a week ago. Security experts also considered that what happened represented a serious security breach, which exposed one of the most important institutions in Washington, DC, to storm. Sundd's resignation came shortly after Police Union President Jos Papathanasio called for "a change at the top".

"The officers are frustrated at how the lack of leadership has undermined the mob response," Papathanasio said in a statement, while praising the efforts made by police officers to deal with the situation according to the circumstances available. It is reported that Washington Police Chief Robert Conte announced yesterday that four people had died, including a woman.

He also confirmed the arrest of 52 protesters, and the injury of several policemen, one of them seriously, after he was dragged into a crowd and exposed to him.

We have 404 guests and no members online