She banned him on WhatsApp. He stabbed her to death 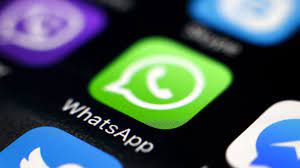 A husband in Brazil killed the mother of his three children stabbed to death, apparently because it was simple.

Edgardin dos Santos, 34, reportedly killed his ex - wife, after she banned him on WhatsApp.

He also brutally stabbed her when she arrived at her workplace in the city of Uruqui, northeastern Brazil, last February 19.

CCTV footage showed the ex - husband arriving at the workplace at 6 a.m.

The killer waited for Mindonka, 32, who worked as a maid in her flag for about 40 minutes.

The cameras spotted moments when the killer attacked the young mother as she struggled to break free of his grip, but he managed her and knocked her down, and started stabbing her. And after he got a little out of the body, he came back and stabbed her again.

Local reports said the crime came after the mother blocked her ex - husband on WhatsApp.

Police arrested the killer at his home about half an hour after the crime, where he was preparing to flee.

An officer at the company said that the two partners had long since separated, but he was still refusing to do so.

He added that the man was angry after his ex - partner blocked him on WhatsApp.