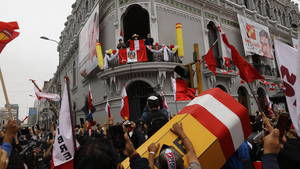 Following controversial statements about terrorism made in 2020, Peruvian Foreign Minister Aktor Bekhar resigned after only 19 days in office, and the statements caused a political crisis for new leftist President Pedro Castillo.

The Press Office of the Peruvian Presidency said that "Today, the President of the Republic, Pedro Castillo, was given his resignation by Actor Bekhar Rivera."

Bekhar (85) is a sociologist who in the past fought with Chi Guevara elements in the 1960s.

A political crisis reportedly erupted after the media aired a video from November 2020 in which it confirmed that the Peruvian Navy was the first to carry out terrorist acts in the country with the help of the CIA.

He implied two attacks against Cubans in 1977 in Lima.

He was convinced, without being able to "prove it," that the former Maoist rebel "Shining Path" movement that had spawned terror in this country in the Andes region from 1980 to 2000 was largely the makeup of the Central Intelligence Agency and Peruvian intelligence.

The Presidency announced that the Head of State had accepted Bekhar's irreversible resignation without explaining the reasons for his departure or stating who would replace him at the head of Peruvian diplomacy.

Defence Minister Walter Ayala González explained in an interview with local radio that Bekhar's refusal to apologize for these statements accelerated his resignation.

Aktor Bekhar took office on July 29 in the first government of President Castillo, who was elected on June 6 after winning the ballot by a small margin over right-wing rival Keiko Fujimori.

We have 200 guests and no members online